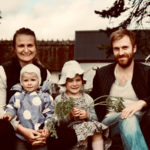 Cream of the Crop PRODUCERS

“I hope to be part of the farming community…”

If you were a grain, which one would it be?
Rye
Whole-grain or not?
Whole Grain
What does your grain alias pair best with?
Sourdough. Fermenting rye with a wild yeast-bacteria population is one of the most culturally and gastronomically interesting happenings in Denmark. Not so interested in adding stuff to grains but rather in what a certain cultivar plus human intervention can do. Just grain 🙂
What role do you play in the grain economy today?
I am part of the production at Kornby Mølle, which is one of the main mills in the Danish organic farming scene. I also believe that being educated as an organic farmer while retaining a sourdough-baker mindset can add lots to the direction and goals of the grain chain (economy).
And in ten years?
I hope to be part of the farming community which is breeding for taste and cultivars under organic growing conditions.
Show and tell:
Once I wrote a story to teach some people about Terroir, this is an extract of it:

“For centuries, Rye was grown by Natalie´s mum family. Well-known for its hardiness and germination at lower temperature, Rye best suited the northern Danish climate. It was difficult to harvest at the right ripeness, due to wet summers. As a consequence, there was higher enzymatic activity in the flour, influencing milling but specially baking. It often developed what is called “starch-attack”, giving Rug-Brød a raw-like texture after baking. Nevertheless, It wasn’t and issue for Natalie. Her mum taught her how to solve it. The trick was in fermenting the sourdough starter longer, lowering the ph and so by, controlling the enzymes.

Without realizing, as an interaction of seeds, climate and Danish peasants creativity, Rug-Brød became the Scandinavian staple, feeding generations of peasants and still now remaining as one of the signatures of Danish Gastronomy.

Rug-Brød was the Danish terroir.”