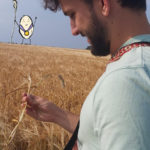 Ever dream of quitting your daytime job so you could trade your current rat race lifestyle for something more grounded? Signe Hauritz, and her husband Mads Bruun, did that.

This is how the story goes:

Signe and Mads want to become part-time, small-scale regenerative farmers. So they buy a piece of land with a house that’s a hundred years younger than the US declaration of independence (1776). As they are renovating the house and trying to figure out the ins and outs of agriculture, they promote their daughter to a new role: big sister. So now they are a sleep-deprived (and happy) family of four, trying to figure things out.

In the meantime, they lease their land to a neighboring farmer. He’s a conventional farmer, so you can smell the pesticide’s stingy odor when he takes to the fields with his self-propelled row-crop sprayer..

After a while, a third child joins the tribe, the leasing agreement ends, and Signe starts farm school when she realizes that she, indeed, has figured something out: “I’m on the right track.”

Signe Hauritz and Mads Bruun’s story is a tale about regenerative farmers in the making. Set on a farm called Kløverlund, in a little village called Gyrstinge, about an hour’s drive from Copenhagen.

Signe is 35. Mads is 33. He has a daytime job (nighttime, actually) at a biotech company, where he produces probiotics for cheese, milk and other foods. This gives him the idea to develop their own food products, for example goat cheese from the milk their goat Ellen provides.

Signe, who has a masters degree in teaching and pedagogy, has her heart set on being a full-time stay-at-home farmer. Both of them are equally passionate about healthy food, sustainable farming and sustainable living. Because clean water, cadmium-free eggs, and nutrient-dense vegetables are good for the body, soul, and planet. But to describe the little Danish family on the “prairie” as driven solely by environmental concerns wouldn’t be accurate.

We are not entirely out of the rat race

They are also a tad Amish in their outlook, in the sense that they value self-sufficiency and economic modesty. In secret admiration of the notion that a crisis in the “outer” society, such as an electrical blackout, would just be considered an ordinary Tuesday off the grid.

– Mads is really good at coming up with nifty economical solutions. We have this solar panel on our roof that we got for a fraction of what it usually costs, thanks to a bargain he made, Signe says. They use it to power their electrical car during the summer months.

Mads also has this idea about how they could eventually give the battery in their electric car a second life. When the battery stops being useful for the car it still has enough capacity to power other things. It can then, for example, be used to store electricity from the solar panels, making solar power accessible on rainy days as well.

Most farmers would confirm that being resourceful, calm and handy is key to becoming a good farmer. Signe and Mads are no exception to that rule. And even though it can feel overwhelming at times, like when the field has to be weeded, or thousands of seedlings are ready for the outdoor soil, it’s not the same type of career-driven stress.

Signe and Mads epitomize the value of being resourceful and calm. They have found a way to buy themselves time—time to spend with their kids, to research heirloom grains and to draw up viable long term crop- and farming strategies.

To grow tasty, nutritious food, you need good, healthy topsoil. So as a farmer, I think it’s important that I care about cultivating or growing good topsoil as much as I care about seeing my crops turn ripe. To do so, I need help from animals.

– We are not entirely out of the rat race, Mads still has his night job, and we are very ordinary Danish consumers, but I would say that with the farm we are less focused on consumption, which I guess has a positive effect on the environment, Signe reasons.

That guess is a modest statement. The way they value resource efficiency and “buying less”, combined with their love for sustainable farming, makes them environmental heroes of sorts. Especially if they  succeed in their quest to become full fledged, no-till regenerative farmers.  Their climate footprint would be remarkably low, as long as they don’t fall prey to the infamous Jevons paradox.

WHAT IS JEVONS PARADOX?

If you, however, do gain lower fuel consumption in total, but not in exact correlation with what is actually possible, only part of the efficiency gains are eaten up by increased consumption: causing a gap between expected effect and actual effect of the efficiency gains. This gap is called the rebound effect. The Jevon Paradox only applies when the rebound effect is over hundred percent >100 % = no gap at all.

A negative rebound effect is the best scenario. <0%. That’s when you decrease your use of an object or machine or something because it has become more energy efficient. For example, your new dryer is 10% more energy efficient, which makes you realise what a large chunk of your electrical bill it has taken up, so you start using it less frequently.

CERTIFIED ORGANIC AS THE BASELINE

Signe and Mads’ strive to be “more than organic”. They value the organic certification, partly because it gives them credibility.

– But it is just the baseline, Signe states.

– I believe it is important to be able to reach end-consumers and restaurants directly. The less intermediaries you have, the better if you want bigger margins.

With the goal of stewarding their land guided by regenerative principles for soil health, they tap right into the core chemical element of the climate crisis: carbon.

With a 12-year crop diversity plan and with their hearts set on fullno-till, they are on their way to becoming small-scale soil sequestration warriors, actively fighting against climate change. But in contrast to the wider climate discourse, veganism doesn’t fit into this equation.

While the pressing concerns about the climate crisis motivate more people to stop eating meat, a vegan lifestyle per se is nothing Signe Hauritz condones.

– I’m not a big meat eater and my kids aren’t either. But the no-meat-notion doesn’t translate to farming without livestock, for me.

– Without animals integrated into crop cultivation practices, you lose essential helpers on the farm, Signe states. She partly refers to how the grazing of plants stimulates the plants to pump more carbon into the soil, which feeds the plants’ microbiome in the soil.

– To grow tasty, nutritious food, you need good, healthy topsoil. So as a farmer, I think it’s important that I care about cultivating or growing good topsoil as much as I care about seeing my crops turn ripe. To do so, I need help from animals.

This brings us back to why farming with a regenerative approach feels so sensible for Signe and Mads.

– By giving the livestock a value that isn’t primarily about turning them into meat or manure producers, you get to act holistically and face the fact that your farm depends on an extensive ecosystem that you have to work with—not against.

– For us, the farm is not just a potential livelihood, but also a better way of life, Signe explains. The animals give an extra dimension of enjoyment, besides being valuable contributors.

HOW TO BECOME PROFITABLE FARMERS

But what about those revenues and being able to live off of the land, long term?

Mads doesn’t want to quit his job just yet, since having a steady income is crucial, but also because of how it is linked to his interests in food development. Signe is the one who can best be described as the full-time farm entrepreneur. And therefore, she gives profitability and economically sustainable business models a lot of thought.

– I believe it is important to be able to reach end-consumers and restaurants directly. The less intermediaries you have, the better if you want bigger magins, Signe explains.

Last year, they sold potatoes, onions, and other produce by the roadside in a grab-and-go, pay-by-phone scheme.

– Getting those notifications every time someone bought a bag of potatoes or onions was thrilling, but having one booth at the end of our road won’t suffice.

This year, Signe and Mads are offering a vegetable subscription service, i.e. a classic CSA box. Subscriptions are available online, and boxes are picked up at Kløverlund.

Signe emphasizes that to become a financially sustainable production, they can never compete on price. They are targeting customers who, instead of being price sensitive, are quality sensitive.

You get a box of at least six different products once a week from mid-June until the middle of November, for 3000 DKK. With the season being approximately 20 weeks, each box will cost you 150 DKK.

It’s early days yet. 2021 is the first year that Signe and Mads try out a proper business model.

– Since I’m still attending farm school, there are limits to how much time we can put into production this season, so I chose to close the order intake after ten paying customers had signed up. I believe we could have sold many more subscriptions.

And on that happy note, they leave behind the rat race.

What does it take to become a regenerative or biodynamic farmer with zero experience?

“I hope to be part of the farming community…”